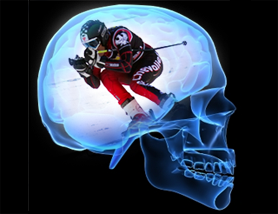 While home on break, I came across an article in the October 2012 edition of Ski Magazine called “Your Brain on Skis” written by Michael Behar, a freelance writer and editor lacking a background in science. Thinking of all the AWESOME talks from last week presenting various neuroscience topics and research to a general audience, I was even more intrigued by this article and curious to see if Behar was successful in conveying the science to primarily non-scientist readers.

Overall, I think Behar did a great job of explaining different aspects of neuroscience at a level accessible to the general public. His article focuses on performance brain training, based in the technique of neurofeedback, to enhance skiing performance primarily by managing fear. While describing his first-hand experience of this training, he also explains concepts such as Hebb’s law and the amygdala in a basic yet thorough style. He also quotes many neuroscientists and psychologists directly rather than purely summarizing their research, which definitely adds to the article’s credibility. One professor of kinesiology that he quoted, Bradley Hatfield from the University of Maryland, introduced a metaphor: The brain is like a surface of a pond – if you throw a pebble into the pond, it ripples throughout – everything is interconnected. Behar added his own addition to the metaphor: “If every pebble in Hatfield’s pond makes waves, then fear is a cannonball.” I thought this metaphor added to both the understanding and general enjoyment of the article, as we’ve seen in Seung’s Connectome as well. Another point of interest to me was a statement in fine print at the bottom of a page consisting of a large brain graphic with several statistics. The statement read, “Speaking of gray matter, many of these statistics are estimates, and open to interpretation.” I’m not sure if Behar was directly responsible for this note since it was at the bottom of a graphic and not within the text, but I thought it was refreshing to see someone admitting the uncertainty of the stats regardless of whether the author himself or an editor acknowledged the ambiguity.

Besides the writing quality and ability to communicate scientific research, Behar brought up some interesting points in the content of the article. My favorite part of the article was when Behar discussed how over-thinking a situation can be detrimental to skiers, athletes in general, and even musicians. I myself have come to this realization while both skiing and playing an instrument – the second I consciously acknowledge my movements and start to contemplate my actions, I stumble over snow or notes that I otherwise wouldn’t. Behar wrote that this is referred to as “paralysis by analysis,” my new favorite phrase that I’ll now use as an excuse to my music teacher whenever I make mistakes! I think this concept can be applied to numerous other disciplines; I’m sure many people find that over-thinking in general can be harmful. In addition to the discussion of paralysis by analysis, at the end of the article, Behar acknowledged that his one training session didn’t cure him of his fear for this one particular ski run (training usually lasts for 20+ sessions). However, the newfound awareness of the strengths and weaknesses of his thought processes was apparently beneficial itself. This made me think of both Mariah’s and Kate’s presentations concerning the need to be skeptical of neuroscience messages in the news. Now that we’re simply aware of the problem, we’re less likely to fall for false conclusions drawn in these articles accompanied by fancy brain imaging. So, in summary, awareness is beneficial, but taken a few steps further, over-analysis can be detrimental.

One thought on “Your Brain on Skis: Paralysis by Analysis”