As living organisms, we experience a wide range of emotions. There are many different theoretical ways of exploring the significance of such emotions, and the implications they have in our lives. Such approaches may include evolutionary psychology, evolutionary anthropology, biology, and neuroscience, just to name a few. Love is a term we’ve ascribed to arguably one of the strongest human emotions. We all have the capacity to love and be loved, so is this elusive feeling an intrinsic characteristic, this love we feel so intensely? Let’s explore the biological basis of love to find out!

While it is true that we all have the ability to define love in our own way, there is certainly a universality to the descriptive term. For example, there are endless songs about love produced and released each year (month, or day for that matter). When we listen to these songs, the words so often feel like they are taken right from our mouths. The music resonates with us in a peculiar way, and we feel that the lyrics were written just for us! Is this further evidence that there is a biological component to love, such that the basic (or not so basic) physiological processes we undergo closely resemble each other?

In this discussion, I will be focusing on aspects of romantic love. For starters, let’s begin by broadly defining this elusive term: Love. Love, as defined by the online Oxford-English Dictionary is, “a deep romantic or sexual attachment to someone” (Definition 1.1). If I were to compare love, and the process of “falling in love” to something, it would be chemistry. Although this analogy may well be a far reach, I am going to liken love to chemistry (the academic study). In chem. labs, we come up with all kinds of cool concoctions, but the coolest sorts, the one’s that professors demonstrate for their students, are the ones that create a reaction. Love, I am arguing, is like a chemical reaction. We can throw all types of elements and substances into a test tube, but only the “perfect” combination will create a reaction that awes the intently gazing chemistry students!

The brain and body release a range of chemicals when we are “in love” and “falling in love.” I won’t get into too much detail, but after doing some preliminary research, I learned that such chemicals include: estrogen, testosterone, dopamine, norepinephrine, oxytocin, vasopressin, nerve growth factor and serotonin. I was fascinated to learn that chemically, the serotonin effects of being infatuated have a similar chemical appearance to obsessive-compulsive disorder. This stunned me, but now so many things make sense! One article adds, “By analyzing blood samples from the lovers, Dr. Marazitti discovered that serotonin levels of new lovers were equivalent to the low serotonin levels of Obsessive-Compulsive Disorder patients” (youramazingbrain.org). What does this all mean? In another article, the evolutionary value of the three states of becoming attached to another is explored. These three states include the following: lust, romantic love, and stable attachment. In the article, this explanation is offered:

Love is an obsessive compulsion that probably evolved as a means for individuals to focus on specific other individuals with enough energy to ensure reproductive success, and possibly long term attachment, which would lead to better chances of survival for offspring. Because love is characterized by obsessive thoughts similar to depression and OCD, it begins to make sense only as an evolutionary strategy. Love is not chemically similar in some ways to stable happiness, but instead includes seemingly inefficient use of energy, as well as frequent disappointment. When seen as an evolutionary strategy to ensure production of offspring, love finally becomes a bit more logical, even if we remain ever susceptible to its emotional highs and lows (intro2psych.wordpress.com).

Clearly, there are endless ways to examine love as a human emotion. A wide range of theoretical approaches to answering the question of what love is will inevitably yield contrasting explanations. Regardless of whatever it is or however we define it, love seems to be a driving force of our lives, actions, and desires. It is possibly one of the most dangerous, exhilarating, frightening, and intoxicating [bio-] chemical reactions, all at once! 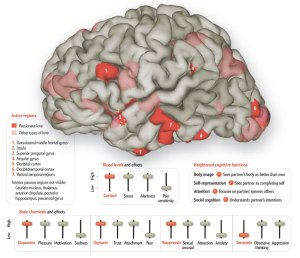