In Brain on Fire, Susannah Cahalan wondered if the autoimmune disease that wrecked havoc on her psyche had been set off by a proverbial business man coughing near her on a train. While her disorder, as well as many other conditions such as Schizophrenia and Alzheimer’s, have a strong genetic component, sometimes viral infections can potentially act as triggering events. In rare cases, pathogens have been known to create symptoms similar to those of a mental disorder and are characterized by a quick onset of severe symptoms. Despite this,there is no evidence that neurological disorders are commonly caused by a strain of virus or bacteria. 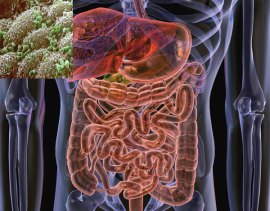 However, a recent avenue of research is focused on examining other ways in which microbes can affect our brains. UCLA researcher Dr. Erman Mayer has hypothesized that the microbes that live in our guts may shape the structure of certain areas of the brain during development and even influence our emotions and behaviors in adulthood. Humans are not just a collection of cells, but also a biome of countless microorganisms located throughout the body. The species of bacteria, archea and fungi located in our skin, saliva, mucus, eyelids and gastrointestinal tract serve a variety of purposes, most of which are still poorly understood. Perhaps the best studied and most important environment for microbial flora is in the gut, where tens of trillions of organisms aid the body in functions such as digestion, enzyme creation and vitamin synthesis. It is also clear that every individual’s microbial biome is unique. Important bacteria species are acquired from the mother’s womb, environmental exposure and food, and the range of situations and conditions through which microorganisms can travel to the gut and flourish creates an incredibly array of individual differences.

However, microbes within the gut occupy niches that are far more complex than what was previously believed. The aforementioned Dr. Mayer observed correlations in humans between structural differences in the brain and the presence or absence of certain species of gut microbes, indicating that microbes may have important developmental effects. Additionally, other research using mouse models has examined the relationship between different types of gut bacteria and anxiety. Gut microorganisms were taken from anxious mice and transferred using fecal microbiota transplant into mice that had previously been fearless. These transplants consistently altered the brain chemistry of the fearless mice and made them more timid. The same effects were observed in reverse when gut bacteria from fearless mice were given to anxious mice, as the mice became more bold and far less fearful. In separate experiments, species of gut bacteria have been shown to release their own versions of neurotransmitters. This communication between gut microbe and brain is likely facilitated through the vagus nerve, a cranial nerve extending from the medulla to the stomach.

In essence, living in our gut right now are species of ‘mind-altering microorganisms,’ as characterized by a Texas Tech researcher. The connection between gut flora, the immune system and the brain is far from fully understood, but signs seem to point that gut bacteria could even be responsible for some neurological and autoimmune problems. A tentative link has been established between gut activity and symptoms characteristic of bipolar disorder and autism. If this research reaches fruition, probiotics could be developed that would mitigate the damage done by these conditions by fostering the development of more “good” bacteria in the gut.