In honor of International Women’s Day this past Sunday (March 8), I thought it would be appropriate to write about the current state of research on the female brain. Although sex has always been seen as a fundamental biological variable, the science community has only recognized that women’s health requires greater attention fairly recently. Female test subjects are still criminally unrepresented in medical research, and, as a result, sex differences in novel health developments have largely been unaddressed. A recent surge in consciousness regarding the issue, however, has given study of the female brain and the possibility of an equally represented research climate new life.

The effort to include women in clinical research made great progress with the NIH Revitalization Act of 1993. Although the act was a step in the right direction, legally mandating the inclusion of underrepresented groups in NIH-funded research, it did not necessarily result in equal representation. As The Atlantic reports, a study by Yoon et al. (2014) found that, of papers published in five prominent surgical journals in 2011 and 2012, twenty-two percent of animal studies did not specify sex, and within the seventy-eight percent of studies that did specify, eighty percent included only male subjects; similarly, seventy-six percent of cell research did not specify sex, and within the twenty-four percent of studies that did specify, seventy-one percent included only male cells (Romm, 2014). Clearly, there is a lot of work to be done to equate the rate of male- and female-focused research in science.

With clear evidence for the benefits of studying sex differences, why aren’t there more researchers using female subjects and investigating female health? Hormones may be one answer. The estrous cycle is thought to be a confounding variable for measures, and indeed, research on parity and depressive-like behavior indicates that elevated gonadal and stress hormones supports this notion (Galea et al., 2008). However, for many measures, female and male mice do not differ in variability throughout the hormone cycle (Prendergast et al., 2014). Therefore, the exclusion of female subjects is largely misguided and should be more widely, as well as carefully, implemented in the future. Another possible explanation for the lack of female representation is convention – sex may still be an under-recognized factor in the science community by some researchers, a school of thought that is fated to change given the mounting evidence for the impact of sex differences.

In May, NIH director Francis Collins announced plans to balance sex in cell and animal studies, and the response has been promising (see the Brookshire, 2014 article in ScienceNews). Hopefully, with this policy change, researchers will make greater effort to learn more about women’s health. 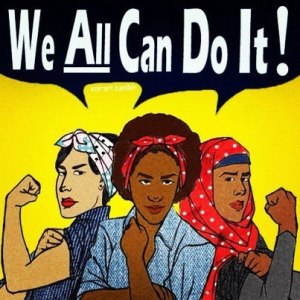 One thought on “Studying The Female Brain”