For my final blog post, I thought I would have a bit of fun and talk about the one of my favorite fictional characters: Sherlock Holmes. I sincerely wish my brain worked like that of Holmes. I envy his innate and incredible ability to read situations and deduce extraordinary amounts of information about individuals. I mean, the man can look at a toothpaste stain and somehow know a person was out late the previous night, overslept, and was late for a meeting, as if this was an obvious fact. Sure, Holmes can be socially awkward and a bit of an ass, but his reasoning skills are enough to leave anybody impressed. So, I am going to use this last blog post to pick apart what is going on inside the famous brain of Sherlock Holmes. 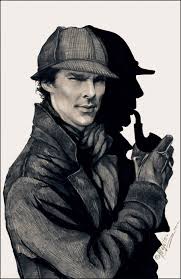 Two powerful skills allow Sherlock to be a successful detective: observation and deduction. Possessing these talents allow Holmes to notice and react to subtle cues during conversations, draw upon the slightest of details when needed, and solve the toughest puzzles and mysteries in the world. They also enable him to attend to relevant clues and create connections between seemingly insignificant events or objects. So, what is going on in the brain that gives Sherlock these two powers? Let’s get into the neuroscience…

According to Sir Arthur Conan Doyle, the creator of Sherlock Holmes, “it is of the highest importance in the art of detection to be able to recognize, out of a number of facts, which are incidental and which are vital. Otherwise your energy and attention must be dissipated instead of being concentrated.” For Holmes, the ability to gather facts and select relevant clues, all while ignoring extraneous information that could cloud his reasoning, is critical in solving his cases. How does he do this? I believe the answer lies in mindfulness. Every day, we see, hear, feel, and smell countless objects. However, we rarely register these stimuli into our consciousness. By not paying attention to them, we cannot encode them into memory and recall them in the future. The mind of Holmes is different. He is conscious of his surroundings and observes each sense. By attuning to the minute visual, tactile, or auditory senses, he takes them out of his working memory and encodes them into his long term memory for future use. In the end, this creates a catalogue of memories he may use in his cases.

Holmes is wonderful at observing the world around him. However, this is useless unless he can make connections between what he observes and what he knows. Fortunately, our favorite character has this ability, too. What in the brain allows him to be a master at forming connections and deducing what events transpired? I argue there are two important aspects: memory and imagination. Holmes remembers details and creates links in ways that nobody else can, which makes him a master at solving crimes. The sheer amount of tiny details Holmes remembers is staggering; one possible reason for this is that he encodes knowledge more easily by giving it a mental location and seeing its uses right away. Holmes creates a mind map (or “mind palace” if you watch BBC’s Sherlock); he visualizes a place where he can physically deposit his memories. Then, he links the new information with previous knowledge, which solidifies the memories in his head. It is of course also possible that Holmes has a more developed hippocampus than the average individual, enabling him to store more information.

Still, the mind map or extra memory capacity is only valuable when paired with Holmes’ imagination. Imagination is complicated; it stems from a widespread network of brain areas that collectively manipulate ideas and images. It is possible that Holmes simply has a larger network, or one with more cross talk and connections. In either case, this enhanced imagination paired with Holmes’ increased memory capacity creates a brain wired for solving mysteries. Check out the Mind Palace of Sherlock Holmes in BBC’s Sherlock below (its the best sherlock version out there- watch it!)

Sherlock Holmes is a witty, outrageous character who manages to fascinate and delight us at the same time. His incredible aptitude for solving crimes captivates audiences, and it’s all due to his enhanced observational and deductive reasoning skills. I hope I have provided some insight into what might be occurring in Sherlock’s brain that facilitates his great talents. Also, check out how improve your memory and make your own mind palace below!

Mastermind: How to Think Like Sherlock Holmes by Maria Konnikova

One thought on “Sherlock Holmes and the Neuroscience of Deductive Reasoning”