Erasing and implanting memories has long been an inspiration for

many Hollywood films, most notably movies like Inception, Total Recall, or Dark City. But this idea sounds so far fetched that most people don’t worry about this being a real possibility. However, optogenetics may make memory tampering a reality in the future. Optogenetics is a relatively new experimental procedure which uses light to activate or inactivate highly specific neurons via light-sensitive channels. The subjects need to have -sensitive proteins, like channelrhodopsin or halorhodopsin added for this procedure to work. Theseproteins are naturally found in a variety of organisms, but are genetically inserted into other organisms such a rats. Once the protein is in the subject, every time a light is shown the neuron will fire. The light activates the flow of electoral ions such as calcium or sodium that causes the neuron to produce an action potential.

This procedure has been used in mice to control their eating or drinking habits (Jennings, 2013). The mice are genetically engineered to have these light-sensitive proteins, and a wire is implanted into their brain. Researchers showed that the mice will continue to eat while the light is turned on, even if they do not feel hungry

. The only way to stop the mice from eating is by turning off the light. By simply switching on or off a light, one is able to control a neuron from firing, resulting in tangible and involuntary changes in behavior. This technique can be used to determine which neurons are needed for certain actions. Also, scientists can now determine what function a neuron has by activating it or deactivating and observing the effects.

There have been some theories that caffeine may prevent memory deficits by perhaps inhibiting the adenosine A2A receptor. A 2015 study showed that the activation of adenosine A2A receptor in the hippocampus, using optogenetics, was enough to impair spatial memory in mice (Li, P. et al., 2015). This study not only demonstrates the correlation between caffeine and a decrease in memory loss, but this 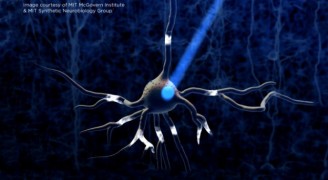 also shows the possibility of deleting and impairing memories in mice using optogenetics. Another study showed that if neurons in the thalamic nucleus reuniens were activated using optogentics the working memory in mice also showed deficits (Duan et al. 2015). As this technique becomes more advanced and is used more often scientists will have a better understanding of which neurons affect memory and how they are affecting it.

Optogenetics was used to look at the effect of nucleus acccumbens (NAc) on the regulation of “cocaine-context associated” memory. What they found was that when the NAc neurons were activated the mice essentially “forgot” that cocaine was located in that region. The scientist also noticed that the activation caused a decreased number of c-Fos+ cells in the VP, which has previously been correlated with a “decrease in drug seeking” (Smith et al., 2013). They concluded that these neurons were important for the regulating reward-seeking behavior caused by cocaine. This may be important for determining how addiction is formed and perhaps helping addition problems.

“The Encultured Brain” by Ridley has a chapter that focuses on the addiction and the idea that the environment can trigger the need to use drugs. Lende writes, “…signals for salience depend on the presence of cues, the structure of environment, and present and past states” (348). This shows the importance of certain environmental triggers for drug addicts. If optogentics can aid in the deletion of the memories involved wi 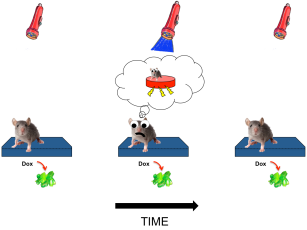 th the recall of these environments, it can have a drastic effects on the how we treat drug addictions. Not only can memories be erased, but false memories can also be added. A 2013 study showed that when dentate gyrus neurons were activated mice froze in a place where they had never been shocked before, showing fear (Ramirez et al., 2013). This fear was not there prior, but after a light was shown these mice had memories of fear in a novel place.

Although optogenetics is fairly new, it is quickly being incorporated into many experiments, and it is allowing us to better understand what effect activating or deactivating neurons has on behavior. It is clear that it is possible, at least in mice, to make a mouse do certain things using optogenetics, we can even erase memories and “make” new ones. One day those sci-fi movies may not look so impossible.

One thought on “The Future of Mind Control”