What motivates your behavior? That is a complicated question scientists have been attempting to answer for years. For a question so broad, there is no one simple answer. So let’s simply the question. What motivates us to actually change our behavior? What do people who actually keep up their New Year’s resolutions know that the rest of us don’t? How are people with addictions able to stop their unhealthy behaviors and initiate healthy behaviors? What drives this change in behavior?

It turns out the answer to this question is not very simple either. In fact, the answer to the question ‘what drives us to be able to change our behavior’ changes from culture to culture. It may not find it surprising to learn that different cultures have different sets of values. What may be surprising is just how important of a role those set of values play on people’s behavior. 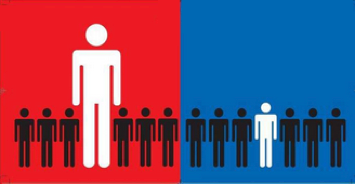 Some countries place high value on the individual, rather than the collective. Such cultures are called Individualists. Individualists cultures foster people who are motivated by their own individual preferences, needs, and rights, giving priority to personal rather than to group goals (Triandis, 1995). Independence and self-reliance are also greatly stressed and valued. The United Sates is a prime example of an Individualist country. Just think of the American dream! It is all about personal work ethic leading to personal monetary achievement.

Other societies place more value on group interaction. Theses cultures are called Collectivists. China is one such example of a collectivist country (Triandis, Bontempo, Villareal, Asai, & Lucca, 1988). Collectivists view themselves primarily as parts of a greater whole. They place value on being apart of a family, a network of co-workers, or a nation. (Triandis, 1995). It is believed that the survival and success of the group ensures the well-being of the individual. Thus, sacrificing the wants of the individual to help the collective is a key value in Collectivist cultures.

Can you describe the photo of the fish below? What is happening with the lone orange fish?

People from individualists countries are more likely to say the lone fish is leading the others, while people from collectivist countries are more likely to say that the lone fish is being chased by the others (Morris, Nisbett, & Peng, 1995). The culture you grow up in, influences your life perspective. Your view on this little orange fish is a clear example of how your culture’s values can alter the way you think.

Attitude is defined as your expectations about the behavior and subjective norm is your culture’s beliefs. Perceive behavioral control is how much control a person believes they have over their own actions. However, in this model, attitude and subjective norm have to potential to contradict each other. Not everyone’s attitudes are always inline with societal norms. Take for example cigarette smoking, an attitude that smoking is relaxing and not dangerous would contradict a country’s belief that smoking is life threatening. So what happens to behavior when an individual’s attitude diverges from the norm set by society? Will people choose to follow their own mindset or do as their culture instructs? This is where a culture’s set of values comes into play.

In Individualists societies, attitude plays the most influential role in determining to initiate a behavior and in collectivist societies subjective norms are the more influential (Ybarra & Trafimow, 1998). Thus, in the example above about smoking, an Individualists would continue smoking while a Collectivist would stop. Researchers found interventions to be more successful if they focused on changing a person’s attitude in an individualist culture and pointing out social norms in a collectivist culture. Individualists change their behavior when their attitude about that behavior changes. Attitudes about a subject can change due to articles, friends, or from a number of sources. Collectivists change their behavior in response to subjective norms. If their towns subject norms are unhealthy, making them aware of their country’s healthy subject norms is most influential. 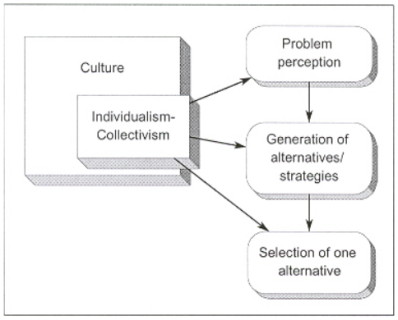 Cultural expectations and values may act as guiding principles for an individual’s selection of decision-making and problem solving strategies. Values guide us towards broad certain decision-making strategies.Thus a problem that puts a group’s goals in jeopardy may not seem like a huge problem to an Individualist as it would to a Collectivist and thus the two cultures would treat the problem very differently. While a behavior may exist cross-culturally, the reasons for engaging in the behavior may change.
Culture plays an incredibly influential and complex role on our behavior and cognition.

Ybarra, O., & Trafimow, D. (1998). How priming the private self or collective self affects the relative weights of attitudes and subjective norms.