As we have discussed, although people may disagree about the extent of beauty conveyed in natural scenes, there is no doubt that people are inherently inclined to find beauty in nature. Evolutionarily, beautiful places were sought out because they aided peoples’ survival. For example, Anjun Chatterjee in his book “The Aesthetic Brain,” explains that hunter-gatherers were attracted to certain places that provided safety and sustenance. Thus, people are often drawn to water, large trees and vegetation, and openness where one can easily see the surrounding area. The African Savannah is an area characterized by many of these environmental features: a high diversity of animal life for food, a plethora of trees providing protection, open grassland providing easy exploration and observance, and scattered bodies of water. In his book, Chatterjee summarizes the results of a study conducted by Balling & Falk (1982), which found that after seeing a variety of landscapes, young participants said that they would like to live in the Savannah over any other environment presented to them. It has therefore been hypothesized that humans are pre-wired to prefer landscapes that resemble features of our ancestral habitat—the African Savannah. Today the majority of people live in urban cities and suburbs, which generally foster alienation from nature. However, through design applications, we can restore the human-nature connection that is seemingly disappearing in the built environment. 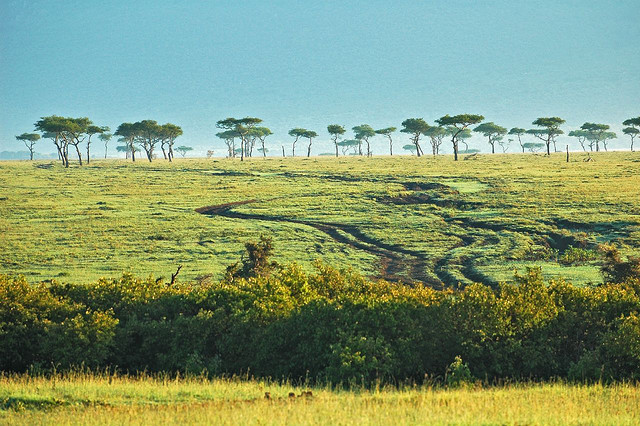 As the world population continues to urbanize, an area of research has emerged that focuses on the integration of biophilic features into our surroundings. The term “biophilia” was popularized by naturalist and biologist E. O. Wilson, and refers to human beings’ innate biological connection with nature. Biophilia helps explain why we prefer the open Savannah landscape described earlier, or certain natural features to others. Some of the elements that contribute to our natural affinity toward a space include visual connections with nature, non-visual connections with nature (auditory, olfactory, or gustatory stimuli that give rise to nature references or actual living systems), airflow variability (mimicking a breeze in a natural environment), the presence of water, biomorphic forms and patterns (references to organic, contoured, textured, or numerical arrangements found in nature), materials from nature, or an unobstructed view over a distance. These examples of biophilic design, which attempt to mimic the patterns, forms, textures and colors of nature, are both aesthetically pleasing and important for our health in a time where it is projected that 70% of the world’s populations will live in cities in the coming decades (Browning, Ryan, & Clancy, 2014).

Increasing biophilic elements such as those mentioned above has been shown to have a number of benefits in the workplace, schools, hospitals, and living environments. In a study conducted by Khan et. al. (2008), researchers found that having a window with a nature view resulted in a 1.6 times faster heart rate recovery from low level stress (similar to the amount experienced working in an office), compared to seeing a nature view on a plasma screen or no view at all. Because viewing scenes of nature stimulates more of the visual cortex than non-nature scenes, more pleasure receptors are activated which leads to a faster stress recovery (Browning, Ryan, & Clancy, 2014). Window views of nature have also been found to increase concentration on tasks requiring high mental effort in high school classrooms (Matsuoka, 2008). Public housing projects in Chicago that were within walking distance to outdoor spaces with trees fostered stronger social ties with neighbors compared to developments with treeless outdoor spaces (Kweon, Sullivan, & Wiley, 1998). Biophilic environments also have important implications for healing: there is evidence suggesting that nature views expedite healing after surgery (Ulrich, 1984). In this experiment, half of patients stayed in rooms with a view of trees, and the other half had a view of a brick wall. Patients with a nature view spent less days in the hospital, used less pain killers, and reported a more positive overall recovery experience. The way we design our built environments clearly has the capacity to improve the way we cope with work related stress, strengthen cognitive functioning, facilitate social interaction, and speed up patient recovery.

The intersection of neuroscience and architecture through the incorporation of biophilic design is becoming increasingly important as the world continues to urbanize. Through adding nature in our design elements we can enhance our quality of life and strengthen our connection with nature—an ever-important task during a time where modern society becomes more and more dependent on technology. The more we can take into consideration the neural makeup of the brain and our ancient sense of beauty when designing buildings, the better off we will be physically, emotionally and psychologically.

Chatterjee, A. (2014) The aesthetic brain: How we evolved to desire beauty and enjoy art. New York, NY: Oxford University Press, 2014.