Humans find averaged and symmetrical faces and bodies beautiful. Well-proportioned, statistically averaged faces receive higher attraction ratings from both men and women. People even regard the more symmetrical twin of identical twins as more attractive. Evolutionary theory suggests that we prefer symmetry because genetic abnormalities and trauma cause asymmetry, i.e. symmetry is an indicator of a genetically adequate mate. Attraction to symmetry is not only a human characteristic, as non-human animals prefer symmetrical counterparts as well. Female swallows prefer male swallows with longer, symmetrical tails. Zebra finches are more likely to mate with males with symmetrical colored leg bands. Peahens prefer to mate with peacocks with extravagant and symmetrical feathers. Interestingly, while the research on birds focuses on the effect of symmetry on females’ choice of mate, in humans, symmetry plays more of a role in men’s opinions of women’s attractiveness. While physical attributes factor largely into a man’s attractiveness, his capacity to protect and provide, power, and status all influence his appeal to a woman. 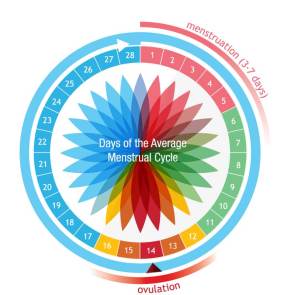 m during ovulation and mate with a large-patched extra-pair.

Similarly (and I thought, incredibly interestingly!), whom women are attracted to also fluctuates across the menstrual cycle. This is the ovulatory-shift hypothesis. Wo
men are fertile just for a brief window of their 28-day cycle. During times of fertility, physical attractiveness as well as masculinity both elicit greater appeal. One research study said that during ovulation, women evaluate men as short-term sex partners rather than as long-term, investing mates. Therefore, “sexiness” proves more important during fertile times. Women prefer physical symmetry, masculine facial features, deeper voices, and intrasexual competitiveness during their most fertile time. A number of fascinating studies have examined the ovulatory-shift hypothesis.

Similar to the collared flycatcher’s changes in attraction to patch size, different qualities are more or less attractive to women when ovulating. When fertile women were shown videos of potential lunch dates, they rated the men who were independently rated as confident and condescending to the other men as sexier than the non-fertile women. Women found arrogant, confrontative, physically attractive men sexier during fertile times than non-fertile times. Attraction to “long-term” partner qualities doesn’t change across the cycle. Women’s attraction to “men perceived to be kind, intelligent, good fathers and likely to be financially successful” remained steady across the menstrual cycle. Talent is preferred over wealth to fertile women. Women also report fantasizing about men other than their current partner more often during ovulation than other times in the cycle. Women with more asymmetrical facial partners were even more likely to be attracted to other men and less attracted to their partner during ovulation. Finally, when non-ovulating women smelled t-shirts that various men slept in for two nights, the women indicated no preference for certain t-shirts. However, when women were fertile, they preferred the t-shirts of the symmetrical men! Research has not yet uncovered which chemical mediates this phenomenon, but the discovery supports the idea that women biologically or evolutionarily seek a genetically gifted mate during ovulation.

One thought on “When Sexy Matters”