My favorite fictional character of all time is Eleanor “Ellie” Arroway, portrayed by Jodie Foster in the 1997 film Contact. In the film we follow Ellie, a physicist, orphaned at the age of 9, as she embarks on a life-long journey to search for extra terrestrial life. While it might sound kind of cliché, I love this movie for the excitement it contains, the elements of pure intellectual introspection, the challenges Ellie faces as a woman in a science field, and because, well… aliens. Duh.

My favorite scene in the entire movie is the first moment Ellie and her team detect a signal from outer space. There is a long sequence in which she is running through the desert screaming a bunch of science into the radio that goes completely over my head. When they finally get the signal tuned in, after anxiously awaiting, they hear a series of pulses. While they seem meaningless at first, Ellie realizes that they are a series of every prime number in a row—a pattern that never occurs naturally. For the full dramatic effect, you really have to see it (link here). 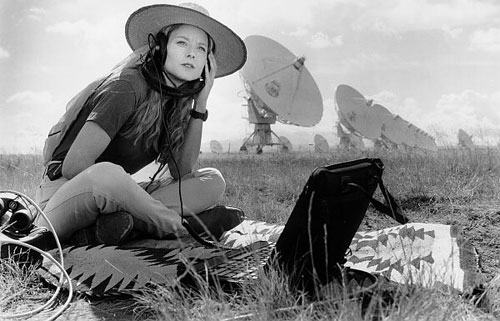 It turns out that within the prime number message, the ETs had embedded a bunch of information about some of their engineering schematics to build a space ship with the capacity to traverse dimensions. When a snobby right-winged conservative asked Ellie why the aliens used “rudimentary math” to communicate rather than speaking English, Ellie responded, “Maybe because 90% of the world doesn’t speak English. Mathematics is the only truly universal language.” I’m not a math person, but I couldn’t help thinking, even when I was a little girl, that this was one of the most beautiful quotes I had ever heard.

It turns out I’m not the only person who has thought that, while difficult, math could be beautiful. In a recent work, Anjan Chaterjee explains in detail different ways that we have been attracted to math throughout human history. There is something beautiful about elegance, and, in the right context, math can be very elegant.

One particularly striking example of this is the Golden ratio (pictured below).

It can be represented by the Greek letter phi and is a ratio is largely considered the most striking example of beautiful math. It is portrayed in many famous works of art and architechture, for example, the pantheon in Greece. Furthermore, it is used in several famous works of art, such as many of Salvador Dali’s paintings. Why do we find these ratios beautiful? A clue may be in its prevalence in nature. A mathematician named Adolf Ziesing discovered that the Golden Ratio is often present in the arrangements of leaves and branches among the stems of plants. Furthermore, he examined skeletons of animals and noticed that this pattern extended to their veins and nerves.

This ratio is also closely related to the Fibonancci series, which is 1, 1, 2, 3, 5, 6, 13, 21, 34, etc. such that the sum of the last two numbers always equals the next. This series goes on for infinity, and as it goes on, it approaches phi, aka the Golden ratio. This series, when plotted algorithmically in a spiral is nearly identical to the “Golden spiral,” a model of phi in spiral form. This spiral is also known to show up in several natural phenomena, such as hurricanes, snail shells and galaxies.

So what’s going on in the brain? Chatterjee references research indicates that the intraparietal sulci of the parietal lobes are active when we approximate quantities, and how the temporal lobe is active when we do calculations (Dehaene et al., 2003). However, after learning all this fascinating information, I can’t help be be a little unsatisfied with this as a description for why we learn to love math. It seems that while there may be research on what happens to our brain when we do math, there is little on why we do math. What exactly is going on in the brain that makes us appreciate this mathematical proportions, even if we aren’t consciously aware of them? It’s easy to see how this ratio could represent beauty and power, and evolutionary fitness, but can we even subconsciously pick up on the similarity of all of these patterns?

Additionally, I know I personally derive pleasure from figuring out a riddle or math problem. What is it about mathematical formulas that make them beautiful when we figure them out? There is the theory that the ability to discriminate numbers and do calculations, while potentially simply a by-product of evolution, was evolutionary advantageous in a world with a lot of information and patterns. Perhaps this means that numeral interpretation activates some sort of rewards system that would have reinforced the behavior. If so, why do so many people have such a visceral reaction to the subject of mathematics? Math is beautiful, yes, but apparently also mysterious, and at some point maybe there is no difference between the two.

Chatterjee, A. (2014) The aesthetic brain: How we evolved to desire beauty and enjoy art. New York, NY: Oxford University Press, 2014.

4 thoughts on ““Math is the only truly universal language””