How have you been affected by dementia? Maybe, in middle school you befriended Thelma and Bruce at the local nursing home. Maybe, you studied diseases in the brain unit of your high school anatomy and physiology class. Maybe, at the age of six, your Dad told you that Nanny was just “being silly” when she wouldn’t remember who you were. If you’re lucky, maybe your only understanding of dementia was graciously (and probably incorrectly) provided by Derek Shepard in Grey’s Anatomy. At current incidence rates, regardless of whether you’ve encountered dementia yet, someone you know will likely be affected by it at some point in your lifetime. Chances are that you might even fall victim to dementia however many years from now, too. 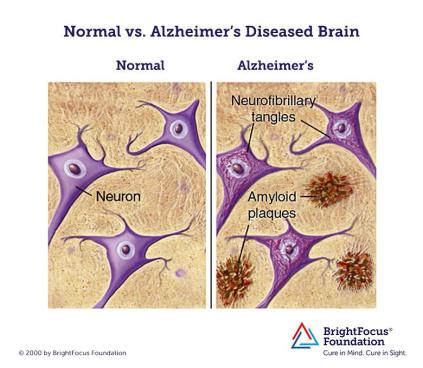 It’s what your mother jokes she’s getting when she forgets where she put the shopping list twice in one week. The umbrella term, “dementia”, embodies all decline in cognitive function that is severe enough to impair day-to-day life. In 2015, the most common form of dementia, Alzheimer’s Disease, was responsible for the second-most deaths in the United States (IHME, 2016). Normal functioning is impacted by damage to brain cells, which causes common symptoms such as memory loss and confusion. Scientists believe Alzheimer’s Disease is caused by the buildup of abnormalities, notably plaques and tangles (shown above). Theories for the cause of these deformities range from chemical exposures to unwanted genetic predispositions written in our DNA. While scientists work diligently for a cure and better treatment options, is there anything the average person can do without breaking the bank? The answer is plants.

While gym goers and non-gym goers alike have been wrapped up in the consumerist protein craze, the glory of fibrous foods has been severely overlooked. The diets of our hunter gatherer or even agrarian ancestors primarily consisted of grains, fruits and vegetables; meat was an occasional treat and processed foods didn’t exist. Back in 3500 B.C.E., lunch was the corn that we now predominantly use to fatten livestock for meat and dairy products. Global dietary trends shifting away from fresh plant-based foods and towards animal products and processed foods pose a tremendous threat to public health. Specifically, in regards to dementia, these shifts are threats to public brain health.

Numerous studies have shed light on the benefits of a high fiber diet in cognitive decline prevention and disease progression. One such study correlated vegetable consumption with stronger mental capacities in elderly women. A positive relationship between cruciferous vegetable consumption (broccoli, cauliflower, etc.) and episodic memory was observed. This suggests that those who consume a diet high in fiber have stronger memory for events. In fact, the slowest decline in memory was associated with participants who consume the most vegetables. The difference in memory performance for participants who consume the least and the most vegetables was equivalent to being two years younger in age. The authors suggest that part of this powerful correlation might be due to the antioxidants in plants, as they have been shown to prevent neuronal damage in lab animals. In addition, folate found in green leafy vegetables, might be also be a hero of the story. Folate deficiencies have been shown to be toxic for brain cells in animal models, shedding light on its importance in the brain (Kang et al., 2005). Whether it’s the antioxidants, the folate, both, or something else entirely, we know that plants are very important for your  brain.

Similarly, another study found that following a diet with emphasis on plant-based foods and limited animal products (MIND diet) is significant in Alzheimer’s disease protection. This study followed elderly participants initially without Alzheimer’s disease and monitored their food intake and cognitive status. The estimated effect of consuming the highest amounts of plant-based foods was associated with a 53% reduction in the development rate of Alzheimer’s disease when compared to consuming the least amounts. This difference was estimated to be equivalent to being 7.5 years younger in age (Morris et al., 2015). Participants in the middle tertile of the MIND diet also saw a slower development rate in comparison to the bottom tertile. This is good news for the average meat and dairy lover, as it means that you can have your cake and eat it too, just in moderation and along with healthy plant-based foods! You don’t need to go fully vegan to reap the benefits of plants.

Up your daily intake of plants, and your brain will not be your only major organ that will thank you. High consumption of plant-based foods has been shown to reduce your risk of heart disease, cancer, and diabetes. The list goes on. So, next time you’re hungry for a snack, do what your ancestors would do and skip the artificially flavored, corn-starch riddled “Fruit Snacks” and opt for a real fruit snack. If you’re a college student like me, grab a banana next time you leave the dining hall for later. If you’re not going to make these changes for present day you, do it for the benefit of your future 90-year-old self who’s still able to remember who you love. Treat your brain with care and find ways to incorporate more and more plants into your diet to reduce your risk of  dementia-related memory problems later in life.

Institute for Health Metrics and Evaluation. (2015). from http://vizhub.healthdata.org/gbd-compare.