Have you ever wondered why your mom is more willing than your dad to try out that new Italian restaurant on the corner? Or why your best friend can’t seem to leave for class unless her outfit’s perfectly color coordinated? Or why that boy in your class is more talkative than everyone else? I think that at some point we’ve all sat back and wondered why, even as the same human species, we are all so different from one another. In fact, some people have wondered so much so that they decided to make a career out of it!

Personality psychology is a field of study that promotes a systematic approach to understanding individual differences in behaviors, emotion, motivation, and cognition through the development of comprehensive taxonomies of personality traits. Albeit being a very broad field, in the recent decades there has been an emerging sub-field called “personality neuroscience,” more specifically focused on testing neurobiological theories of personality (DeYoung & Gray, 2009; Canli, 2008).

The brain is a mere 3% of our body weight, and yet it somehow it contributes so much of who we are as individuals. The variations in our decisions, thought processes and unique idiosyncrasies largely originate from that pink blob of mush up there in our skulls. Simply put, the circuitry and functioning of our neurological processes must be a critical part of what constitutes our personalities and individual differences. 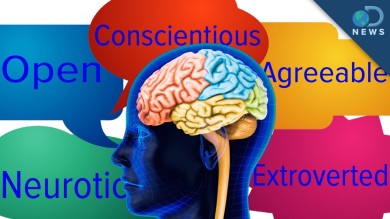 In personality psychology, the fact that many characteristics vary in synchrony implies that there are a limited number of underlying factors that account for variations in traits. Today, a five-factor solution to the correlations among personality traits is most widely used; a taxonomy known as the “Big Five” (Costa & McCrae, 1992, John, Naumann, & Soto, 2008). In this model, there are five key traits: 1.) Oppenness to Experience, 2.) Conciensciousness, 3.) Extraversion, 4.) Agreeableness, and 5.) Neuroticism. Of the Big Five, Extraversion and Neuroticism are the best understood in terms of their underlying processes (DeYoung et al., 2010). So the next logical question is… why? What is it about our complex biology that allows us all to experience the same traits (granted, along a wide spectrum) despite differences in culture, age, time or location?

With the technological advances being made in neuro technology, the ways to study personality are improving rapidly. Electroencephalography (EEG) methods are used to measure electrical activity on the surface of the brain; fMRI imaging allows for viewing the 3D structure of the brain and subsequent activity. In one study, researchers using fMRI imaging found correlations between brain activity and four out of five of the “Big Five” traits. Summarized briefly, they found that for extraversion, there was a significant association with volume of the medial orbitofrontal cortex. For neuroticism, the two largest associated regions were the right dorsomedial PFC and in portions of the left medial temporal lobe. In agreeableness, there was a positive association in the posterior cingulate cortex and a negative association in the superior temporal sulcus. Concienciousness was associated positively with a region of the lateral PFC, and associated negatively with the posterior fusiform gyrus (DeYoung et al., 2010).

In another model of personality neuroscience, researchers focused on the impact of neurotransmitters (NT) and NT pathways on personality tendencies. Specifically, they looked at dopamine and the corresponding mesolimbic dopamine pathway in relation to extraversion-related reward seeking behaviors (Cohen et al., 2005). What they found were direct correlations between individual differences in extraversion and variability in the reactivity of the reward system when receiving monetary rewards. To be completely honest this study was a tough one for me to wrap my head around – the molecular genetics component went right over my head, but the takeaways I did understand helped me see that while situational factors may play a role, biology undeniably plays a critical in the conception of personality.

So what does this all mean? Practically, I mean. Why does it matter what the size of someone’s PFC is, or if they’re more outgoing or they like to perfectly line up their pens at the start of every class? First, the clinical implications of this are enormous. What if we were able to hone in on the neural correlates of anxiety within the trait of neuroticism? There are studies negatively correlating marital satisfaction (among other negative life outcomes) with neuroticism; what if understanding neural circuitry helped improve psychiatric and therapeutic interventions? Personality is an intriguingly abstract concept that can only be identified by specific characteristics that scientists have deemed relevant through trial and error. Thus, by adding a biological component to what we “know” about personality, we add an invaluable bit of knowledge to the list of things identifiable to each personality trait.

Writing this blog post actually left me with more questions than answers regarding personality neuroscience. We know that personality is general stable across the lifespan, but how does that change if someone develops a degenerative disorder that directly impacts one of the structures significant in Deyoung et al.’s findings? We know that psychiatric disorders such as schizophrenia have an adolescent to young-adult age of onset – how would morphological changes in the brain have an impact on significant personality changes? Would long-term SSRI and other drug use affect NT concentrations in the brain in a way that would result changes in personality? With improvements in technology aiding the way psychologists and neuroscientists can physically see the brain, I’m hoping that some of these questions will be answered in greater detail in the years to come.

In sum, personality neuroscience has helped us understand a lot of stuff about what that mushy control center in our skull may be doing, and how it may be contributing to making us who we are. We still have a ways to go before concrete clinical applications and takeaways are extracted from these experiments, but each discovery adds to a bank of critical knowledge. Of course, if the past 5 years studying neuroscience has taught me anything, it’s the  importance of realizing that things will never be as black and white as I’d like them to be – I find it relatively unlikely that there is universally one precise pathway for each personality trait. There isn’t one area of Sally’s brain that would “light up” in a fMRI scan each time she felt like speaking out of turn in class. The brain is an amalgamation of complex interactions, and something tells me that the biological basis of personality traits is no different.

2 thoughts on “The Biological Basis of Personality”