Why is it that some of us would rather spend every waking minute in the company of another, whereas others need some time each day to recharge and recuperate independently? Or that some of us regain our energy by being alone, whereas others thrive on the energy emitted from larger groups of people? We all have that one friend – the one who’s the polar opposite of ourselves. At least I definitely do! I love time alone. Not only that, I need time alone. Even just an hour each day of time alone, increases the quality of my interactions tenfold. But one of my roommates is the complete opposite of me – she loves people, no matter what day, no matter what time. She loves being around people, talking to people, meeting new people, learning from people. She once turned to me and said, “Elisa, you’re the most outgoing introvert I’ve ever met.” And so that’s what I’m going to be talking about here today.

For a long time I’d thought of introversion and extraversion as being modifiable personality characteristics; that is, characteristics that we could change if we really tried. And then a few years ago, I listened to Susan Cain’s TEDTalk, “The Power of Introverts.” In her talk she explains how integrally engrained being an  or an introvert is to who we are as human beings. And how even if as introverts it would be easier to miraculously morph into the type of person who is energized, rather than exhausted, by copious amounts of social interaction, it’s not entirely a choice. So that got me thinking, what, if any, is the neurological differentiation between what constitutes an  from an introvert? Why are my roommate and I so different, on a neuroanatomical, chemical, or physiological level, when it comes to our threshold ability to handle constant interaction with those around us?

It turns out a surprising amount of empirical research has been done on this exact topic. The most salient difference lies in the neurotransmitter systems of dopamine and acetylcholine. The first, dopamine, is a chemical neurotransmitter released in the brain that provides the motivation to seek external rewards – it has widespread action throughout the brain, but most commonly and abundantly acts on a system that we have colloquially deemed “the reward pathway”- the mesolimbic cortical pathway, which involves the nucleus accumbens (NA) and ventral tegmental area (VTA). Regardless of introversion or extraversion, a study shows that when dopamine floods the brain, human beings across the board become more talkative, alert to their surroundings, and motivated to take risks and explore the environment (Corr & Kumari, 1997). Contrary to initial assumption, in a natural resting state, it’s not necessarily that introverts have less dopamine in their brains than extroverts do – the difference lies in the activity of the dopamine reward network. In a 2005 study, researchers examined the brains scans of individuals while they participated in a gambling task – they found that when the gambling brought about positive results, the extroverts exhibited much stronger responses in two regions of the brain – the amygdala and the nucleus accumbens, relative to the introverted participants. While this did not elucidate any causation hypotheses, it was the first clear indicator of differential activation in distinct brain areas associated with reward, fear, and reactivity. 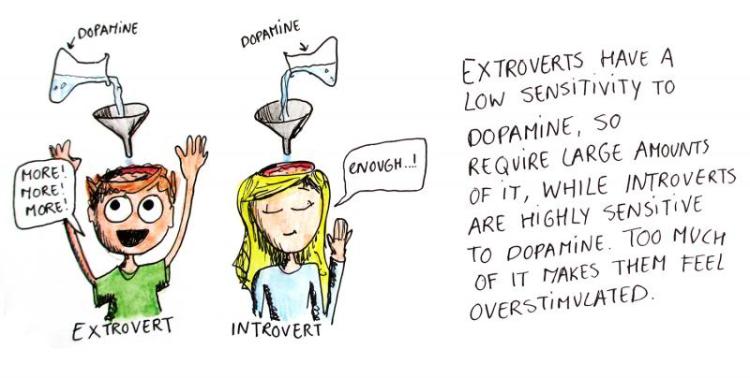 Dopamine gives us immediate, intense zaps of happiness when we act quickly, take risks, and seek novel experiences – all things that are characteristically more common in observed in extroverts. Acetylcholine, on the other hand, also rewards us, but its effects are more subtle – it can make us feel more relaxed, alert, and content – all hallmark qualities of your classic introvert. Scott Barry Kaufman, the Science Director of The Imagination Institute at the University of Pennsylvania, explains how acetylcholine may play a role specifically in explaining why introverts act the way they do. Several studies suggest that the pathway through the brain laced with acetylcholinergic receptors may be longer- thus running through more brain structures – in introverts especially (Cohen, 2005).  This mea 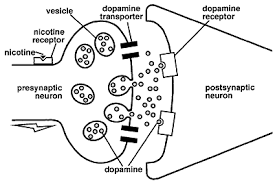 ns that areas such as the front right insular, an area associated with empathy, self-reflection, and emotional meaning, may be activated more heavily through acetylcholine. Not only that, there’s clear differences in cholinergic stimulation in the bilateral frontal lobes, as well as the left hippocampus and Broca’s area. The activation of these structures fundamentally changes the way that individuals perceive and experience the world around them, both intrinsically and extrinsically.

Moving away from neurotransmitters and towards anatomical morphology, a recent study indicated a difference in gray matter volume in these two types of personalities. Researchers observed larger, thicker grey matter in the medial prefrontal cortex (mPFC) of their participants who identified as introverts – extroverts had markedly thinner gray matter volumes in the same area. The medial prefrontal cortex is critical in decision making, introspective thought, and other selective memory processes – thus, (along with several other salient conclusions) researchers took this disproportionate allocation of gray matter as indication that neural resources function differently between the populations; a plausible hypothesis was that introverts needed to devote a larger proportion of synaptic connections to abstract thought and internal processing of emotions and interactions, whereas extroverts did not.

As a student who has spent the majority of the year studying neural plasticity and adult brain development, I’m skeptical as to whether these neurological processes are truly black and white, unchanging, defining characteristics of our individual human experience. As a personal example, I wonder what would happen to my brain  (and thus my subjective experience) if I continually put myself in situations where I was ar

ound other individuals, despite my true desire to be alone. Would my brain adapt to process dopamine in the way that it currently apparently utilizes acetylcholine? Am I destined to be a solo-traveling, staying-in with a cup of tea on a Friday night, runs alone in the woods, individual for the rest of my life? And what about the fact that I DO actually enjoy the company of others, up until a certain point? Is that indicative of some sort of threshold for dopamine activation, after which I need time to recuperate? Clearly, I have more questions than answers. Despite the research that exists in this realm of individual difference, more needs to be done. This line of research is so important, considering the fact that human beings are, at our very core, social creatures. The deeper we understand these social differences, the sooner, and better, we get at accepting and understanding each other.

One thought on “Blame it on your brain: Why you prefer to be alone”