Usually when people think about Post-Traumatic Stress Disorder, they are imagining a soldier returning from war or someone recovering from an abusive relationship. The idea of someone claiming to have PTSD without some socially shocking sort of trauma is blasphemous. But in honesty, more people are diagnosed with and are struggling from PTSD than one would think. PTSD is commonly diagnosed in people who have suffered from natural disasters, sexual violence, emotional experiences, or any variety of stressful events.

When someone is struggling with Post-Traumatic Stress Disorder, their disease is inhabiting many facets of their day-to-day life. In order to be diagnosed with the disorder, one must be exposed to a stressor; examples of these stressors include death, threatened death, actual or threatened serious injury / sexual violence (American Psychiatric Association, 2013). This stressor must be present through direct exposure, witnessing, learning about trauma of a relative, or indirect exposure to trauma (I.e. through being a first responder or medic). Along with the stressors, the stressor must re-present itself to the person through unwanted memories, nightmares, flashbacks, emotional distress, or physical reactivity (American Psychiatric Association, 2013).

People diagnosed with PTSD also must show avoidance of stimuli related to the trauma through either related thoughts, feelings, or reminders. These reminders and re-experiences will lead to a host of negative changes in cognition and mood. These feelings would worsen following the trauma and may include exaggerated blame of self or others related to the trauma, negative affect, disinterest in activities, isolation, and basic inability to experience positive events (American Psychiatric Association, 2013). In addition to this, the person must experience trauma-related arousal worsening after the trauma such as increased aggression, risky behavior, hyper vigilance, or difficulty concentrating and sleeping. All of these symptoms must present themselves for at least one month and cause significant impairment and must be a direct result of trauma.

Diagnosis with PTSD can occur at any time across the lifespan, and is 2-3 times more likely to be experienced by women. Overall, the lifetime prevalence of PTSD for women is 10-12% and 5-6% in men (Olff, 2017). The difference in sex-related prevalences is often attributed to the difference in 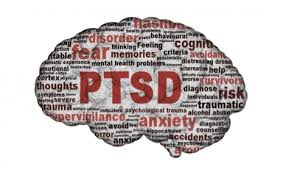 experience. Women are more likely to be exposed to high-impact trauma such as sexual assault at a young age (Olff, 2017) and more likely to re-experience negative emotional states. Another proposed reason behind more women experiencing PTSD is a difference in oxytocin levels between the sexes. Women have a more sensitive hyperarousal system and the fluctuation in oxytocin levels is experienced more intensely (Frijling, 2017). However, sex is not the only risk factor for experiencing PTSD. Other risk factors include, but are not limited to (obtained from National Institute of Mental Health, 2020):

PTSD symptoms are often treated with a mixture of medication and cognitive behavioral therapy. Though the treatment has been well established, the biological origins of the disorder are less well-understood. In prior research, the relationship between neurogenesis and PTSD has been researched.

Past studies have revealed a modulating effect of stress on neurogenesis but less study has been done to examine the effect of neurogenesis on stress recovery.  Shoenfeld et al. (2018) examined the behavioral effects of single-prolonged stress (SPS) and unpredictable restraint stress (URS) immediately following a stressor and after a latency period. They found that SPS increased anxiety-like behaviors, enhanced a fear recovery, and decreased object preference. Restraint stress, a milder form of stress, did not produce a significant difference in behavior in any of these tests. For all of the rats 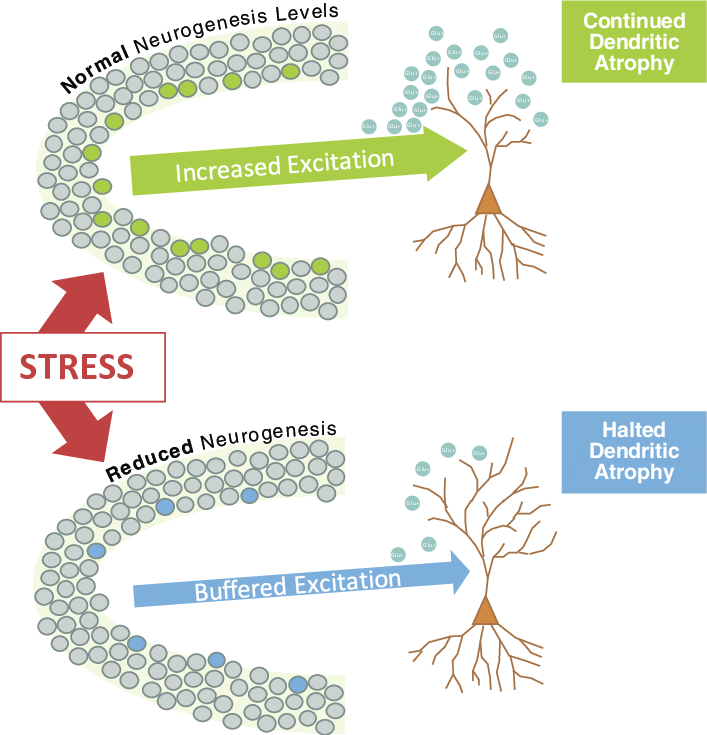 experiencing SPS, the behavioral effects remained for at least 10 days following the stressor. However, for rats with intact neurogenesis, anxiety-like behaviors and fear recovery behaviors returned to normal after a period of 5 weeks, pointing to the importance of neurogenesis in stress response. These results were not seen in the rats whose neurogenesis was inhibited as they remained anxious and responsive to fear recovery.

The interesting part about the fear recovery in the rats was that rats undergoing normal neurogenesis did not experience a heightened freezing response when placed in a previously-stressful environment after a time delay. Rats without the ability to create new neurons or to have those neurons survive in the hippocampus experienced a similar response in the environment without the stressor as they did when the stressor was present, similar to PTSD in humans. Even without the stressor present, the negative emotionality and re-experiencing of the trauma is enough to induce negative affect. The proposed explanation for this is that neurogenesis provides ability to suppress learned fear-conditioning and only induce a fear reaction when a stressor is present (Shoenfeld et al., 2018). Without neurogenesis, generalization of a fear response is enhanced and causes a fear reaction in an environment when a stressor was present or in conditions when a stressor could be present (Shoenfeld et al., 2018).

Post-traumatic stress disorder can be very emotionally-taxing for those who experience the re-entry of trauma in their lives through re-experience. A predisposition to PTSD could be the role of neurogenesis in the dentate gyrus of the hippocampus. Without this process intact or at full function, stress responses can be generalized and re-experienced without specific context. This causes great distress in the life of an individual. With neurogenesis, people can be free to live their best lives, just like the rat pictured to the right!