Recent dispute over the legality of marijuana use and its health impacts sheds light on the controversial nature of the issue. While some proponents of marijuana emphasize its medicinal benefits, others are in favor of using the plant for recreational purposes. In our previous class discussion, we briefly touched upon the link between marijuana use and schizophrenia, which is why I became interested in learning more about cannabis and its effects on the brain.

The THC in marijuana binds with our body’s cannabinoid receptors to exert its effects.  Because the hippocampus has high concentrations of cannabinoid receptors, when THC binds with these receptors, it interferes with our working memory. This was of particular interest to me when considering what we know about schizophrenia; however, it is important to note that cannabis has effects on a number of different bodily functions, some of which are believed to be therapeutic.

In a study that explored the effects of marijuana use, it was reported that teens who smoked marijuana daily for about three years had abnormal changes in their brain structures related to working memory and performed poorly on memory tasks (PsychToday.com). Not only does this serve to solidify our understanding of the hippocampus’s  function, but it also makes the link between schizophrenia and cannabis clearer. Patients with schizophrenia display hippocampal volume reduction and memory deficits, and the effects of cannabis use have been found to be similar to some of the effects of schizophrenia, as noted above. 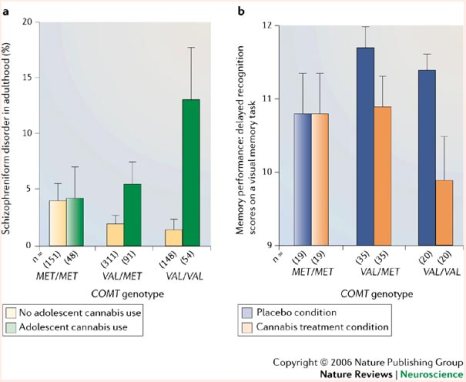 2 thoughts on “Let’s weed out the misconceptions: Cannabis and its effects on the brain”