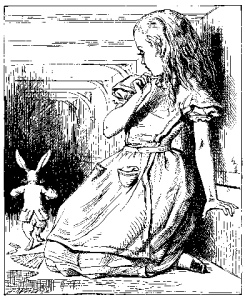 After learning about Savant’s Syndrome from Jenny’s paper topic presentation and Alien Hand Syndrome from the zombie book, my curiosity in these syndromes lead me to research other syndromes that were rare and interesting. Among the syndromes I reviewed, many were discussed in the zombie book; ones like Capgras Delusion and Walking Corpse Syndrome but also new syndromes such as Alice in Wonderland Syndrome and Jumping Frenchmen of Maine Syndrome. I was most interested in the Alice in Wonderland Syndrome so I did some research on it.

Alice in Wonderland Syndrome (AIWS), also known as Todd’s Syndrome, is a neurological state of mind that affects perception. It is most commonly seen in children instead of adults with unexpected and random episodes lasting anywhere from ten minutes to an hour. People who experience this syndrome can perceive objects to be bigger than they are (macropsia) or much smaller than they are (micropsia). It is categorized as a temporary condition and can be commonly associated with migraines and brain tumors. Some of the causes of this syndrome can be from a migraine where pain isn’t necessarily experienced, the Epstein-Barr virus that is a contributor for mononucleosis, temporal lobe epilepsy and brain tumors. The accompanying symptoms can be agnosia or memory loss, anxiety and hallucinations. The most common symptom can be alteration of body parts when the patient views their body parts as out of proportion and abnormal. It is a rare syndrome with only a small percentage of the population experiencing this. There is no specific treatment for AIWS because it is often hard to identify the root cause. For migraines there are ways to alleviate the symptoms and there are some medicines for migraines that involve beta blockers, calcium channel blockers, and antidepressants that help prevent the onset of symptoms. When an epileptic person has AIWS, it is up to them to find ways to relieve those symptoms with methods that work best for their seizures. Acute AIWS is hard to treat and a patient needs to learn to live with symptoms or wait until they disappear. Some factors that allow a patient to manage this syndrome include learning to avoid the buildup of stress, dehydration, tiredness, and adaptation to their environments (myhealthyfeeling 2015).

One study explored the specific brain areas involved with AIWS (Brumm et al., 2010). The study involved a functional MRI of a 12-year old boy who had AIWS; it was conducted during one of his episodes of micropsia. The results concluded that when he performed tasks there was reduced activation in primary and extrastriate visual cortex areas and increased activation in the parietal lobe cortical regions compared to a control subject. This was an interesting study to find because AIWS is found in a small pool of people. To see how AIWS involves the brain was an informative finding but I would be interested to research further and see how it correlates with the epileptic seizures.

On a side note—Lewis Carroll is known to have been a Migraineur, and it is thought that much of the imagery for his “Alice in Wonderland” may have been inspired by his own Migraine auras and distortions in perception.

2 thoughts on “Did Lewis Carroll have Alice In Wonderland Syndrome?”