Today, we learn to “say no to drugs” before we even learn what drugs are. We’re taught that drugs can turn any good kid down the road to disaster before we’re even taught multiplication. Across the United States, the dange

rs of drugs are engrained into the minds of children by local badge-wielding heroes as part of the Drug Abuse Resistance Education (D.A.R.E) program. My local Sheriff told us the story of Dan, a high schooler who punctured his hand several times with a staple gun, while high on LSD. Whether this actually happened or not, I don’t know. Nevertheless, the image of Dan on has stuck with me up to this point, over 15 years later, and has been successful in steering me away from ever trying LSD.

For a while, the story of Dan was the first thing that would come to my mind when I thought about psychedelic drugs. A similar story might come to your mind upon thinking of these illicit substances. Or, maybe you would think of the hippies attending the well-known music and art festival in Woodstock. Maybe you would immediately think of the classic song “Lucy in the Sky with Diamonds” by the Beatles (note the main letters L, S and D in the title). Perhaps your mind would be drawn away from the 60’s and 70’s and towards the recent renaissance of LSD across North America. Whatever your thoughts may be when thinking about psychedelic drugs, the potenti

al benefits of using these illicit substances likely aren’t on the forefront of your mind.

It was only really since coming to college that I learned that using “recreational” drugs does not always have to reflect poor character and judgement and that there are benefits. No, I’m not talking about the social perk of smoking weed with your friends to relax and have fun. Rather, I’m referring to the clinical use of psychedelics for the treatment of mental health issues. The therapeutic use of psychedelic drugs is not a novel idea. In fact, research on the benefits of psychedelic drugs was conducted in the mid 1970s, until restrictions were enforced (Majić, Schmidt & Gallinat, 2015). Today, advancements in technology are helping to take part in the revival of such colorful research. Substance abuse treatment and the reduction of anxiety in the terminally ill are just two promising examples that lend evidence to the importance of the clinical use of psychedelics.

Research on the use of psychedelic drugs as substance abuse addiction treatment originally emerged in the 1950s and extended into the 1970s. The potential for such treatment was sparked by the observation that LSD trips were similar to the withdrawal effects of alcohol, known as delirium tremens. These intense hallucinations, pain and hyperactivity have reportedly been enough to prevent some alcoholics from relapsing. Thus, it was theorized that the controlled induction of these withdrawal-like symptoms through a hallucinogen could prove beneficial in discouraging further consumption of alcohol (Majić et al., 2015).

However, it soon became apparent that the benefits of LSD were not limited to the innate similarities between an LSD trip and delirium tremens. In fact, researchers discovered that consuming LSD did not just make the walls breathe and make colors brighter but also produces a powerful transcendent state. One trip of LSD can often increase one’s awareness of their holiness, increase internal unity and produces a positive mood. Interestingly, these effects are similar to those that an alcoholic might develop after weeks of attending Alcoholics Anonymous. Amazing, right? To shock you just a bit more, studies have shown that just one single dose of LSD produced beneficial anti-addictive effects lasting up to 12 months after treatment (Krebs and Johansen, 2012 as cited in Majić et al., 2015). To put this into perspective, humans will be able to travel to and from Mars in this time frame (NASA, 2017). This study alone is telling of the potential beneficial effects of psychedelic experiences and perhaps students nationwide aren’t being told the full story.

A potential explanation for this powerful anti-addictive effect suggests that the hallucinations improve and normalize the connections between two important brain regions. These hallucinations can be thought of as repair workers fixing the train tracks connecting the parts of the brain typically responsible for judgement, reason and planning (prefrontal cortex) and the regions responsible for processing and controlling of emotions (the limbic system) (Ross, 2012, as cited in Majić et al., 2015). Check out the image below to see these important brain regions. Current literature on this topic is fairly scarce, and, thus, more research w 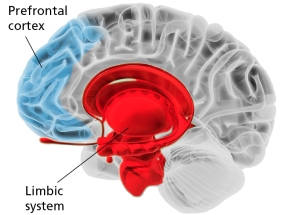 If you’ve ever known someone with a terminal illness, you probably know that it is not uncommon for these patients to be depressed and anxious about their imminent death. A recent study examined the effects of a psychedelic compound found in not-your-average-mushrooms (psilocybin) on anxiety and mood in patients with advanced terminal cancer. A single dose of

this psilocybin was found to reduce anxiety for up to three months and improve mood for up to six months after treatment (Grob et al., 2011, as cited in Majić et al., 2015).

If you’re not yet convinced of the potential benefits of psychedelic experiences, let me tell you that the effects of psilocybin did not stop here. Patients reportedly developed stronger relationships with loved ones, gained insight into their diseases’ impacts on their lives, and demonstrated reduced feelings of hopelessness. The induced transcendent state also reportedly helped diminish fear of death in participants. It’s amazing to think that all of these effects were produced after just one little dose of a drug. Grob et al. (2011) noted that these effects were observed after a single low-moderate dose of psilocybin. How much longer would these effects last for if participants were given a high dose of psilocybin? I can only hope that one day soon researchers will get the go-ahead to study this important research question.

Evidence for the mechanism of action of psychedelics points towards specific serotonin receptors being the hero of the story (Majić et al., 2015). Serotonin is an important neurotransmitter found in the brain, which acts to help specific cells in the brain communicate via chemical signals. In one study, the effects of hallucinogens were diminished when participants were simultaneously administered a drug designed to block these serotonin receptors (Kometer et al., 2013, as cited in Majić et al., 2015). Therefore, serotonin receptors likely largely contribute to the occurrence of mystical experiences and the transcendence of time and space that are characteristic of LSD and other hallucinogens.

In sum, psychedelic drugs do not only guide people to see the beauty and goodness in the world around us. I believe their immense potential should not be limited by government restrictions and society’s misrepresented perceptions. The positive effects of these vivacious drugs must just outweigh the harmful ones in certain situations. Of course, this opinion is based on only a few studies that have been conducted and thus more research is required. I believe that as a society, we need to focus less on demonizing psychedelics and focus more, instead, on pushing for  further research on their potential benefits. Since these are such powerful illicit drugs, I do believe it is important that D.A.R.E students are told stories about Dan and others who have experienced negative effects. However, in order to progress, the benefits of these transformative substances should not simply be swept under the rug.

Majić, T., Schmidt, T, T., Gallinat, J. (2015). Peak experiences and the afterglow phenomenon: When and how do therapeutic effects of hallucinogens depend on psychedelic experiences? Journal of Psychopharmacology, 29, 241-253.